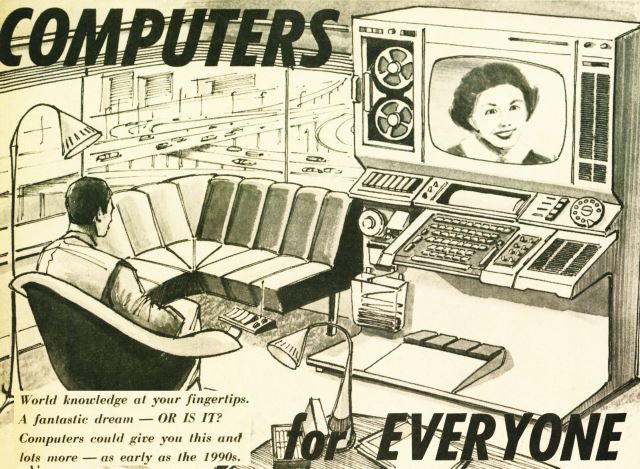 When I was a child in the 1960s, I remember reading an illustrated article about what the world would be like in 50 years – approximately where we are right now, in fact.   It looked pretty exciting.

Personal jet packs and flying cars were featured. There would be massive cities under the sea and a little bubble-shaped one on the moon, too. The inconvenience of messy plates of food would be replaced, I read, by the tantalizing thought of sachets of nutritious goo that we could squeeze into our mouths as if we were earth-bound astronauts.   Mentioned almost as an afterthought was the idea that people might have computers in their homes. I can still visualize the picture in the article: a clean-shaven man in slacks (holding in his arms a little blonde girl in a red dress who looked like she’d stepped out of an early Ladybird book) was consulting a computer in his hallway. “Before setting out on a journey”, the caption said, “this man is checking his home computer to see what the traffic will be like”. The computer, which had a small display dwarfed by an array of tape reels, was about the size of the chest freezer that hummed in our garage and which contained the catering packs of chicken drumsticks my parents regularly bought from Bejams.

The future didn’t quite work out the way the article had promised me. I can’t say that I care hugely about the non-appearance of cities under the sea or of goo-food and I feel only a small pang of regret for jet packs, but what is genuinely astonishing is how badly the article underestimated progress in computers. Because, as we all know, these days computers are everywhere – miniaturised to a startling degree and becoming exponentially more powerful. A Yale study from 2001 concluded that the rate of increase in power (per constant unit of cost) had been 55% every year since the 1950s, or, to put it another way, tens of thousands of times in each quarter century. [1]  Needless to say this has had a profound effect on our society. Information is now available to everyone. Activities take place on computer (and smart phones) via the internet that would have astonished my parents in the 1960s: video phone calls; betting on foreign exchange; dating. It has also had a profound effect on businesses ranging from catering to cabs, and in particular those businesses that are, in a sense, ‘weightless’ – that is, which rely primarily on information to operate. Arguably most important among these is banking. As I put it in my book  (“Why Aren’t They Shouting?”):

“These days … a bank is in essence nothing more than a lot of people and a collection of legal contracts represented on some very complex computer systems. Put simplistically, banks are just people and computers; all the rest is nice to have but not essential. If that statement surprises you, consider this: virtually all the money you get paid, save or spend is not physical in any sense whatsoever but is merely an abstract representation in 1s and 0s on some bank’s computer system somewhere. A symptom of this is that I myself have not been into a physical branch of the institution I bank with for many years, nor in that time have I seen a person who works there with my own eyes. Asking around, it seems I am not atypical. In days gone by a bank was defined by its great vaults, its glossy headquarters or its extensive branch network. Increasingly, a bank’s true crown jewels are held in the form of bits and bytes in unremarkable data centres on light industrial estates in anonymous suburbs. Similarly, the multi-headed menagerie of mortgages, mortgage-backed bonds, collateralised debt obligations and credit default swaps that teems and writhes through the story of the 2008 Great Financial Crisis was nothing more than a huge number of legal contracts represented abstractly in the innards of thousands of computers. To understand banking, therefore, you must understand how computers have changed and redefined the industry – how they have eaten it.”

This, then, is the purpose of this blog – to explore the interactions between technology, society and finance in order to understand what is happening and why. Given the gigantic importance that the banking and finance sector has on all of our lives, it is increasingly vital to do so.  I will also look at other, current but non-technological topics as markets and politics shift – the world of finance, although I am no longer in it, still fascinates me.  I hope you enjoy reading it.