An examination of the trends in market share for two of the bank’s previously most dominant business lines (FX and the German derivative securities unit) suggests how tricky it will be for Deutsche to perform the balancing act it requires in order to recover.

The bulk of my 15 years at Deutsche (21, if you count the time spent at the subsumed Bankers Trust) were spent in the FX business.  By pretty much every measure it was a very successful team: by profits, customer satisfaction, excellence in its return on equity and – most visibly to the outside world – chart topping market share.

Within the bank, FX was regarded as a bit of a poster child for the often repeated claim that DB was an ‘intelligent flow monster’.   A weird, insular, computer-obsessed poster child – true – but up there on the poster as a big, smart exemplar of Deutsche’s goals nonetheless.

These days I have no idea how successful the Deutsche FX guys are in terms of profits or return on equity: I wouldn’t ask the friends I still have in the department and they wouldn’t tell me; they’re professionals and it’s none of my damn business.  That said, it is clear that the top echelons of the bank still rate FX.  Witness the way that CEO Christian Sewing singled out the team as an area of  ‘core strength’ (slide 9) that will get more investment in 2019 – not something you’d do for weak performer.

Now, in a way, this is not as dramatically significant as it might look to the external, untrained eye since, beyond a certain point, there is only a weak relationship between market share and revenues in FX.  Typically, a fraction of your flow gets you the bulk of profits (the 80/20 rule); the remainder is increasingly marginal and a small rump of flows actually loses you money.  As long as flow volumes are reducing in the ‘marginal’ or ‘losing’ buckets, overall market share can fall with only a subdued impact on P/L.

For all that, if DB FX was once seen as an 800-pound gorilla, now it’s perceived more as a burly, vicious chimp (which, though certainly not an animal avatar I’d like to fight unarmed, is undoubtedly a smaller beast).  At the margin, this perception matters: in terms of hiring, say, or when a client is handing out the invitations for banks to join a shortlist to hedge a large, lucrative one-off transaction.

Of course, it is possible – for all the Euromoney staff’s intense efforts to cross check the numbers – that the survey is misleading.  It’s just a survey after all.  But market share numbers from another (formerly) leading DB business make me think that the broad pattern is correct.  That business is the issuance of German derivative securities.

Derivative securities are big news in Germany.  Around euro 70 billion notional of this stuff is currently outstanding – that is, roughly euro 1,000 for every German adult.  And it is overwhelmingly German adults who buy the securities: they are a common means of investing for wealthier, more sophisticated private individuals.

Although the majority of the derivatives are linked to equities, credit or fixed income assets, some are based on FX or commodities prices.  Thus it was, back in the day, that I had a fair number of dealings with the team that run this operation at Deutsche Bank.

They were impressive.  They had a deep understanding of their market and their customers and they paid attention both to the soft aspects of getting the business done (e.g. branding) and – miraculous to me, so used to other areas to the bank – to the tedious, but utterly necessary technical, computer-geeky details of bringing their products to market.

I can’t say they were a joy to deal with (no negotiation with another part of Deutsche brought me ‘joy’ as such) but they were rational and fair and I never felt the violent urge to end my existence after meeting them.  They also successfully dominated their market share tables.

But that was then; this is now.

According to reliable figures from the Deutscher Derivate Verband (the trade association of the top 16 issuers) DB’s market share of total volume outstanding in the last quarter of 2010 was 17.38% (rank number 1) but for the third quarter of 2018 – the last quarter to be reported – it had slipped to 8.18% (rank 5th).  It’s a sharp drop – like that in FX.

Both declines are shown in the graph below.   Alongside the market share numbers DB’s share price is plotted on a separate scale. 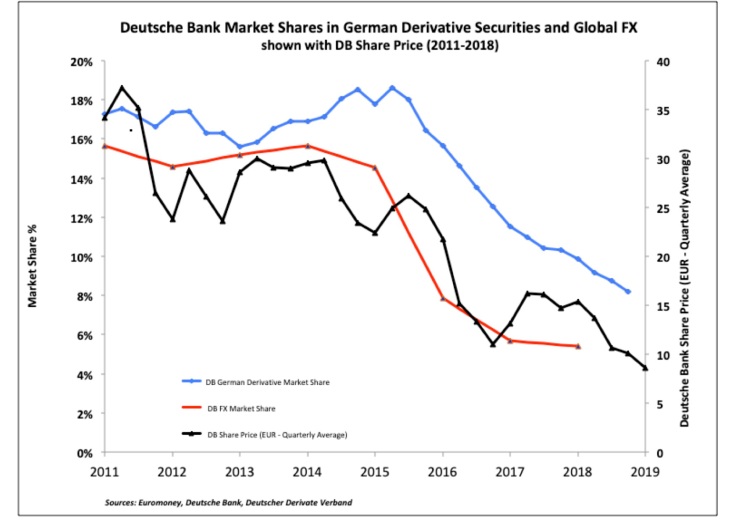 What looks clear is that the plummet in DB stock price in 2015 and 2016 coincided with the steady market share decline of two of the bank’s previously most dominant businesses.

It’s unlikely that the causation ran from declining market shares to the stock price. Neither FX nor the derivative securities business is quite big enough to dominate the health of DB’s profits as a whole, and, besides, as I mentioned before, business line profits do not track market shares one-to-one.

Instead, all three falls were doubtless driven by a common factor: the general decline in trust in DB’s creditworthiness and stability – a slide that is reflected in DB’s cost of borrowing, which is now higher than almost all other European banks.

Certainly that would explain the derivative security numbers – these investment products are, at heart, a loan to Deutsche Bank.  What rational investor would not be tempted to pull back a little and give their business to another bank?

Even in FX – which is not a heavily credit-intensive business – at the margin it’s the case that worried customers may divert their flows to other houses.  Deutsche was the beneficiary of this effect (in reverse) during the crisis of 2007 and 2008 when its FX market share swelled to close to 22% as customers switched to European banks to avoid those from the US.

The perception of weakness is even undermining the very core of Deutsche’s longstanding raison d’etre – the servicing of German corporates.  Astonishingly, it is now only the fifth biggest provider of credit to German business – down from first as recently as four years ago.

So the problem for DB is clear: in order to generate the profits needed to restore the market’s faith in it, it needs strong businesses like FX, German derivative securities and many others (e.g. the Global Transactions Bank) to regain their 800-pound gorilla status.

But, at the same time, these businesses will be hampered by a continuing negative perception of Deutsche’s strength.  To get away from analogies involving big monkeys for a second: it’s a horrible chicken-and-egg dilemma.  To get better perceived, DB needs growing revenues; to get growing revenues, the bank needs to be better perceived.  Which comes first?

The plan appears to be a gradualist one.  Grind away at costs and get RoE up to 4%, then higher.  But this will all take time; time in which Deutsche’s aggressive competitors will be nibbling away at its franchises and hiring its best people with the cold, hard cash that their skills can demand in the open market.

It will be a long, narrow and rocky road to navigate.   Since I write this as an ex-colleague (and, by now, very minor DB shareholder) I wish them the very best of luck.

They will need it.